Bipartisan group of federal policymakers honored for commitment to kids

Pennsylvania Partnerships for Children was in Washington, D.C. this week to present 2017 Champions for Children awards to nearly a dozen Republicans and Democrats in the U.S. House and Senate in recognition of their commitment to improving public policies and support for investments that benefit the commonwealth’s children. The awardees join almost 60 state policymakers and Gov. Tom Wolf as part of PPC’s 25th Anniversary as a voice for kids.

“These policymakers have been true partners, working with PPC to advance policies that affect our most vulnerable citizens across several policy areas, including children’s health, child welfare, early learning and K-12 education,” said Joan L. Benso, PPC President and CEO.

“The mutual respect and trust we have built are invaluable to PPC and we appreciate the open lines of communication and the opportunity to set politics aside and work in a bipartisan fashion to come together for Pennsylvania’s children,” she said.

Federal policymakers who received awards this week are:

“This dynamic group of policymakers understands how their decisions can impact a child’s life. By continuing to work together, we can improve child well-being and make Pennsylvania a top state to raise a child and be a child.

Benso noted that PPC currently is working with federal policymakers on efforts to ensure the preservation of the Medicaid program and stop any changes that may impact children as a result of potential actions to repeal the Affordable Care Act; the reauthorization of the Children’s Health Insurance Program (CHIP) and the Maternal, Infant & Early Childhood Home Visiting Program (MIECHV), both of which will expire in September absent Congressional action; and appropriations for critical children’s programs such as child care and Head Start.

Learn more about PPC and its accomplishments as a voice for kids since 1992.

Pennsylvania Partnerships for Children is a strong, effective and trusted voice to improve the health, education and well-being of children and youth in the commonwealth. For 25 years, PPC’s public policy victories have helped countless children learn, thrive and succeed, regardless of circumstances. PPC is statewide, independent, non-partisan and non-profit.

EDITOR’S NOTE: Photos of award presentations are available at: https://photos.app.goo.gl/zpthlijRzsc6U2QS2. 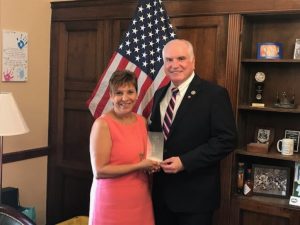