The latest report from one of the most comprehensive national reviews of child well-being shows Pennsylvania with gains in economic well-being for children and families, but poor performance in education.

The 2017 KIDS COUNT® Data Book, issued today by the Annie E. Casey Foundation, ranks Pennsylvania 18th in the country for overall child well-being. The Data Book uses 16 indicators to rank each state within four domains – health, education, economic well-being and family and community – that represent what children need most to thrive.

“Pennsylvania made some improvement in the economic well-being of kids, but overall these data show that failing to invest in children has consequences,” said Joan Benso, presidentand CEO of the Pennsylvania Partnerships for Children (PPC). “For Pennsylvania to increase its national ranking for education, we need increased state investments in Pre-K, coupled with increased state support in basic education funding, so that all students have a chance to succeed.”

According to the Data Book, Pennsylvania now ranks:

“If we want to build a brighter future for our children, we must provide a solid foundation for learning, a public education system that helps them meet state standards and support programs and services that help keep children healthy and protect them from abuse and neglect,” Benso added. “Investing in critical programs and services now will result in better social and economic outcomes down the road.”

The 2017 KIDS COUNT Data Book is available at www.aecf.org. Additional information is available at www.aecf.org/databook, which also contains the most recent national, state and local data on hundreds of indicators of child wellbeing. Journalists interested in creating maps, graphs and rankings in stories about the Data Book can use the KIDS COUNT Data Center at datacenter.kidscount.org. 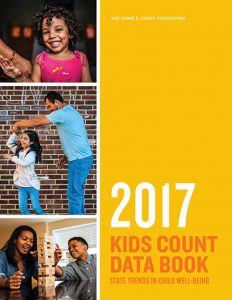