For the second year in a row, Pennsylvania has dropped in the national rankings for overall child well-being, falling to 18th in the country, according to the 2016 KIDS COUNT® Data Book issued today by the Annie E. Casey Foundation.

“Our gradual fall in rankings in recent years reflects Pennsylvania’s failure to prioritize investments in our kids,” Benso said. “We need stronger investments in critical areas like child care, evidence-based home visiting programs, high-quality pre-k and k-12 education starting with this year’s budget and continuing in the years ahead to turn this ranking around and begin moving up in state rankings.

“Pennsylvania’s children are the single greatest resource we have to build a bright future, but we’re not being aggressive enough in ensuring we are giving our kids what they need to succeed,” she added.

The Data Book uses 16 indicators to rank each state within four domains that represent what children need most to thrive. Pennsylvania now ranks:

On the whole, the report indicates Pennsylvania’s children are still facing tough economic times due to a sluggish recovery, while poverty continues to be a challenge in many households and a large number of children are in households where parents lack a high school diploma.

“Because we know education is an effective tool to help children get ahead, Pennsylvania needs to invest more aggressively to increase access to high-quality pre-k and better fund our schools so every child has the resources to achieve, regardless of where that child lives,” Benso said. “Every year we wait is a year we risk falling further behind.”

“This generation of teenagers and young adults are coming of age in the wake of the worst economicclimate in nearly 80 years, and yet they are achieving key milestones that are critical for futuresuccess,” said Patrick McCarthy, president and CEO of the Casey Foundation. “We urge candidates instate and national campaigns to describe in depth their proposals to help these determined youngpeople realize their full potential.”

Additional information is available at http://datacenter.kidscount.org, which also contains the most recent national, state and local data on hundreds of indicators of child well-being. The Data Center allows users to create rankings, maps and graphs for use in publications and on websites, and to view real-time information on mobile devices.

Pennsylvania Partnerships for Children is a strong, effective and trusted voice to improve the health,education and well-being of children and youth in the commonwealth. Since 1992, our public policyvictories have helped countless children learn, thrive and succeed, regardless of circumstances. PPC isstatewide, independent, non-partisan and non-profit.

The Annie E. Casey Foundation creates a brighter future for the nation’s children by developingsolutions to strengthen families, build paths to economic opportunity and transform strugglingcommunities into safer and healthier places to live, work and grow. KIDS COUNT® is a registeredtrademark of the Annie E. Casey Foundation. For more information, visit http://www.aecf.org/. 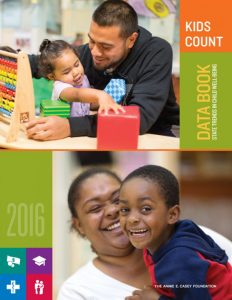