Pennsylvania Partnerships for Children (PPC) today released a report in its role as a principal partner of the Pre-K for PA Campaign urging candidates running for office in 2018 to support high-quality pre-k to improve Pennsylvania’s economic competitiveness. Year after year, the economy and education are among the top issues weighing on the minds of voters.

Harnessing the voices of former Governors Edward G. Rendell and Mark S. Schweiker and powerful business and economic development leaders across the state, the report urges candidates for governor, the state legislature and U.S. congress to commit to making Pennsylvania a top state for its per capita investments in high-quality pre-k.

“The time to make Pennsylvania a leader in high-quality pre-k investments is now. There is no better investment in our children, our communities and the future economic vitality of our commonwealth,” said Rendell.

“Our kids have only one chance to benefit from high-quality, publicly funded pre-k. We are proud of the bi-partisan support pre-k now enjoys in our state, but we can and must do better,” said Schweiker.

According to “Pre-K Works, So Why Not PA?” Pennsylvania ranks 18th out of 30 states that make public investments in high-quality, publicly funded pre-k, despite having increased its per capita investment by $30 million for the current fiscal year. Presently only 36 percent of eligible children in Pennsylvania benefit from the opportunity. Without expanded access, school success and skill development for early learners will be weakened, ultimately compromising the state’s ability to develop a stronger workforce.

“There is no issue that I concern myself with more than the future of Pennsylvania’s workforce,” said Peter J. Danchak, President, Northeast PA PNC Bank. “My company looks to policymakers and candidates for office to make investments that will ensure not only today’s workforce but the workforce of tomorrow.”

Joan Benso, President & CEO of PPC noted that a mix of red and blue states invest more per capita than Pennsylvania including Maryland, New Jersey, New York and West Virginia.

“We know that pre-k works and the widespread, bipartisan support it enjoys is undeniable,” she said. “The 2018 elections present an opportunity for those seeking public office to commit to making Pennsylvania a top state for pre-k investments. Candidates who support stronger state investments will be proposing a winning combination for voters on both fronts.”

“Pre-k is a proven investment that helps children start their education on strong footing and build a foundation that leads each child down a pathway where he or she will be an important contributor to the local economy and the state’s economic well-being,” said Nick Scott, Jr., Vice President, Scott Enterprises.

To reach all children who would most benefit, state policymakers should invest $85 million in the 2018-19 fiscal year to double the expansion of the last three years, and grow the investment with an additional $225 million by the 2020-21 fiscal year to serve all at-risk children.

“Pre-K Works, So Why Not PA?” can be found at www.papartnerships.org/prekinpa 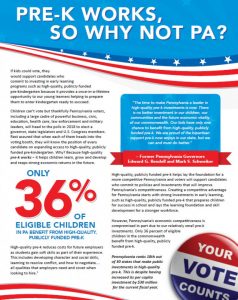