PPC annually compiles State of Child Welfare data in an effort to gauge the performance of Pennsylvania’s child welfare system in meeting the needs of the children and families the system serves. We gather comprehensive data for each of the 67 counties, including information on foster care placements, children leaving or re-entering foster care, and efforts to reunify children with parents or relatives.

Some highlights from this year’s report include the following:

Data for each of Pennsylvania’s 67 counties can be found below. 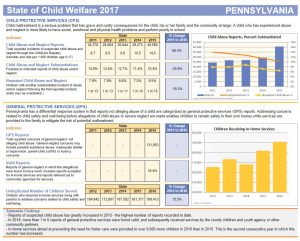