This report is the Pre-K for PA Campaign’s third report comparing Pennsylvania’s per-capita investments in pre-k. It shows states with similar political compositions and quality standards are making stronger per capita investments, putting their early learners on the road to success in school and in life at a faster pace than Pennsylvania. 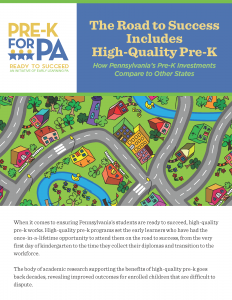