Pennsylvania Partnerships for Children released its 13th annual State of Child Welfare report, highlighting several gaps in the child welfare system as well as recommendations on how it can be strengthened. The report features critical data on abuse and neglect, the foster care system, removal reasons, congregate care reduction, transition age youth, and racial disparity and disproportionality in the child welfare system.

“Pennsylvania’s child welfare system is exhausted, unable to adequately respond to the needs of children, youth and families, or the racial disparities and disproportionality in the system,” said Kari King, PPC president and CEO.

This statewide report includes child protective services (CPS) and general protective services (GPS) data. CPS includes reports of abuse such as physical, sexual, and serious physical neglect, among others. GPS reports have less-severe findings, often focused on indications of neglect, and can include parental substance use disorders, truancy, and homelessness, among others.

In 2021, there were 38,013 CPS reports, an increase of over 5,000 from 2020. However, the substantiation of reports declined somewhat from the previous year. Cases of repeat child abuse and neglect also slightly increased in 2021, with the highest rate of reports in the last five years.

“A decline in substantiation could mean the workforce is overloaded and cannot thoroughly investigate cases of physical and sexual abuse and serious physical neglect”, said Ms. King.

King emphasized, “Data from 2021 shows a flood of non-abuse allegations and an increase in substantiation, pointing to a workforce overloaded with non-abuse cases that other systems could support. Agencies cannot achieve positive outcomes unless they are adequately staffed and supported to effectively carry out the duties of keeping children safe, families intact and promoting permanency and a successful transition to adulthood.”

Children and youth are entering the foster care system for many non-abuse reasons, raising concerns about the appropriate use of placement, specifically for allegations under GPS. While GPS allegations can present a risk to a child’s safety, with community-based support and intervention, a child can remain safely in their own homes without needing placement.

“Far too often, Black, Hispanic, and children and families of multiple races are over-surveilled, investigated, and represented in all aspects of the system,” said King.

Disproportionality is apparent at the level at which groups of children are present in the child welfare system at higher or lower rates than in the general population:

Almost 1 in 4 children and youth in placement experienced a re-entry into care. Transition age youth, or youth ages 13 and older, make up almost half of the population re-entering placement.

“Children and youth at risk of abuse and neglect deserve a child welfare system equipped to respond to their individual needs and that uses group housing or congregate care placement only as a last resort,” stated King. “And counties must work to diversify their workforce to represent better the communities they serve and reduce bias.”

The CPS and GPS data included in the report is from the calendar year 2021. The data captures the last half of the 2020-21 school year, and the beginning of 2021-22 with most operations resuming to pre-pandemic conditions. 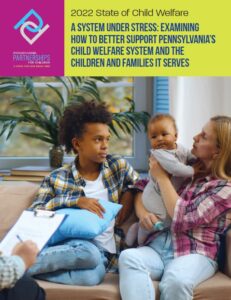